Tango and Portland were destined to be together and this is how they met. 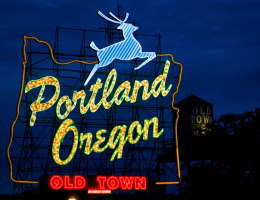 1991 my (then) partner and I (Polly McBride) attended a Seattle workshop in something we’d never heard of called “Argentine Tango.” Before class, instructors Sonny Newman and Patty Leverett did a demonstration that featured flying legs, whirling turns and fabulous footwork. We were instantly smitten and promptly committed ourselves to learning whatever it was we had just seen. We practiced for a year in the corner at folk and social dances, ignoring inquisitive looks.

In 1992 we met Clay Nelson and his (then) partner, Mary Gilbert, at workshops in Corvallis taught by Michael Walker and Luren Belucci. They convinced the four of us to attend Stanford Tango Week, which we did in ‘93 and 94. We were thrilled, enthralled and deeply challenged by the steepest learning curve any of us had ever experienced. During the following two years we attended numerous workshops in Seattle taught by Nito and Elba, Esther and Pablo Pugliese, Carlos Gavito, Omar Vega and many others. including the then current stars of Forever Tango.

In 1994 Clay and his partner began teaching beginning classes to their ballroom students and my partner and I hosted a Sunday Tango Tea. In November 1994 Clay invited Argentine Maestra Nora Dinzelbacher to teach workshops and he soon began hosting teachers from Seattle and the Bay Area once a month.

In 1996, Clay was teaching ballroom dancing on Sunday afternoons at the newly re-opened 100 year old 5000 sq ft Crystal Ballroom in downtown Portland. The management asked Clay if he would focus on tango the 3rd weekend in October because they were planning o hiring a local mandolin tango orchestra for that Sunday.  Clay just happened to be aware of an authentic Argentine tango orchestra called Tangatarea playing in San Francisco that same month and suggested hiring them instead–which the Crystal Ballroom agreed to. Knowing that few dancers in Portland knew authentic Argentine tango, and that many ballroom dancers would show up and dance ballroom tango, Clay decided to bring in a few good Argentine tango teachers as models from Seattle and San Francisco–two cities that were about 10 years ahead of Portland in learning tango.  And, he payed their way by having them teach a few classes on the same weekend. Since the event was in October, he decided to call it a TangoFest after the many October Fests that take place in the U.S. and Munich, Germany in the Fall.  The event was a huge success with with about 300 attendees and as they say…the rest was history.  The following February Clay added an additional festival he called ValenTango. Over the years these two events used dozens of different studios and vintage ballroom that Portland is blessed with, including the Melody Ballroom, Paradise Studio, Temple Ballroom, Tiffany Center, Scottish Rite Temple, PPAA, Viscount Studio and Imago Theater to name just a few.  Eventually TangoFest pretty much settled into mostly being at Norse Hall and ValenTango at the DoubleTree Hotel.

Our 2013 community has approximately 250 enthusiasts who frequently attend milongas and practicas, and many more who attend occasionally. A few people who have made outstanding contributions towards establishing, developing and maintaining Portland’s tango scene are acknowledged below, with a much-abbreviated listing of their activities. There are countless others whose support, participation and contributions have been, and continue to be, extremely valuable to the continued growth, quality and spirit of Portland Tango. Sorry they could not all be included.

Mary Gilbert and Dick Morris, former partners of Clay and Polly, were instrumental in helping establish the Portland community. Dan Timmins and his wife Dolores (deceased) were perpetual promoters and hosted the first weekly milonga in Vancouver. Gillian Leichting originated Friday Night Milonga at the former Temple Ballroom and was the first Portland DJ to play music in tandas and cortinas.

From the beginning, Clay Nelson supported, encouraged, and offered his studio to anyone who wanted to teach or bring in guests. His policy of cooperation and collaboration has had a very positive, long-term influence. Clay’s continued policy to hire quality teachers and provide opportunities to dance and socialize with fellow enthusiasts from across town, across the country and  across the pond, have put Portland on the tango map.

Megan Pingree has graciously hosted many of our visiting instructors in her beautiful home and has been selected by several of our guest teachers to partner them for workshops and demos.  She served on the TangoFest and ValenTango Executive Teams till her retirement from festival planning in 2012. Megan hosted the Friday night milonga for nearly twelve years and has DJed at milongas across the country. She partners Alex for many of his classes, and is Bill Alsup’s teaching partner, stand-in instructor and alternate host for the Sunday Practica.  One of Portland’s best known and highly respected instructors, Megan taught group and private lessons for nearly fifteen years. Since 2008 she has been semi-retired and teaches only private lessons.

Robert Hauk introduced Milonguero Style/close embrace, to Portland and brought in teachers who gave us a completely different view of tango. He helped create and then co-hosted the original Sunday Practica. Robert established the very popular Monday Night Milonga at the former Viscount Ballroom, hosted Mondays at PPAA for a number of years and is currently hosting at Treasury Ballroom. He specializes in DJing music of the Golden Age of Tango.

Bill Alsup hosted one of the early milongas on Tuesday evenings downtown at Sege’s Restaurant. He created and then hosted Portland’s website for several years. Bill and Robert created the Sunday Practica, one of PDX’s longest running and most popular events which Bill has hosted for the past several years.

Alex Krebs hosted a weekly practica/milonga while attending Reed College and after graduation, he studied Spanish and tango intensively in Buenos Aires. Alex created and owns Tango Berretin studio, hosts 1st and 3rd Sat milongas, sponsors special events and intensive workshops, has taught locally and in several other countries, DJ’s his own milongas and is a featured guest DJ at many others, is an accomplished bandoneonist, composes, arranges and directs for multiple tango orchestras and ensembles. He has produced, directed and choreographed numerous stage productions.

Amy PK added a new dimension to the Portland Tango scene when she and  Andrew Burt created Alternative Tango at Nocturnal Studio over ten years ago. The event was very popular with college students and has relocated to Norse Hall where it offers a mix of traditional and alternative music. Amy has worked diligently with Portland Parks and Recreation to organize a major annual public tango event at Director’s Park which is attended by several hundred participants. She has studied in Buenos Aires, taught group and private lessons, hosts the Wednesday night Opening Milonga for TangoFest and ValenTango and is on the 2013 TangoFest Board of Directors.

Laurie Ann Greenburg expanded the scope of our community when she initiated Ladies Leading classes and practicas. She has brought in well-known instructors to teach women how to lead and to be comfortable on the other side of the frame. Ellen Saunders and David Whitman hosted La Firulete milonga at Euphoria Studios for a number of years. David was one of the original  Festival Taxi Dancers and Ellen chaired Festival Registration for several years. Peter Esser DJ’d and hosted the milonga at Euphoria with Ingeborg Mussche a few years.

Steven and Jayne Payne are among our well-known, long-term instructors and have assisted with our festivals in various ways. Matthew Schwartzberg now specializes in repairing and building intricate, complex parts for bandoneons. He is relied upon by local and out of area bandoneonists for his expertise. Matthew was Polly’s assistant for four years at the Friday Practica.

Rachel Lidskog has taught tango at Portland State University and many other schools and studios in the area for seventeen years. She has taught in various countries and partnered many well-known Argentine instructors. Rachel hosts teachers from BsAs and other locations at her studio, Dance With Joy. She has choreographed tango performances for numerous student groups and is known for her enthusiasm, high energy and patience with beginners.

Jerry Wallach hosted Thursday milonga at North Star Ballroom a few years and then relocated to Norse Hall. He and Lilah currently host Thursday Tango and have hosted the very well-attended New Year’s Eve Party. Scott Forbes established the Portland Community Tango Fund that assists students with financing for classes and workshops. He manages the donations received for the non-profit organization.

Jay Rabe is the current host of Portland’s web site and Portango-a, our Yahoo groups announcement list.  His Tango House is a popular venue for weekend tangueros, festival attendees, classes, and TangoFest 2013 meetings.  Jay is one of the directors of TF 2013.

In 2013 Clay turned the organization of TangoFest over to a few members of the community including Producer, Lu (Marge) Dobie, and Directors Jay Rabe, Amy PK, Adam Cornett, Emily Medley, Momo Smitt and What’s-Her-Name. Our goal is to continue the tradition of presenting a high quality festival that  participants of all skill levels and style preferences will enjoy and benefit from.

So there you have it, well, a tiny portion of it. We’ve been a Community for almost 20 years and each moment, experience and participant have brought us to where we are today. Every community has its founders and I am privileged to have been one of ours.